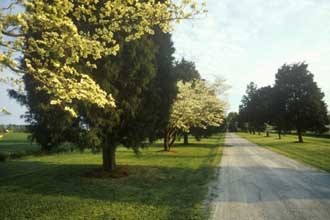 If you’d like to experience history and beautiful buildings pretty much as they were in Colonial times, when you visit Williamsburg, be sure to take a day trip (or two) and visit one (or more) of the James River Plantations.

You’ll find them in Charles City County along Virginia Route 5.

Five plantations make up the James River Plantations. They are:

The oldest among them was built in 1619. All have been preserved and, while privately owned, at least three of the five are open to the public.

No, this was not the home of Robin Hood. Rather, it was the place where U.S. President John Tyler lived from 1842 until his death in 1862 and his descendants still own it (via the Sherwood Forest Plantation Foundation). They’re known to visit the site frequently.

The house itself (built in 1720) is the largest frame house in the country. It’s now more than 300 feet long and became so when President Tyler himself added a 68-foot ballroom so that it would accommodate dancers of the Virginia Reel, an exceptionally popular dance of the time. It’s of the classic Virginia Tidewater design. Its grounds include 25 acres of terraced gardens and the original outbuildings. This plantation is believed to be the most complete plantation left in America.

Interesting note: The plantation does have a bit of a tie to Robin Hood. Tyler renamed the plantation Sherwood Forest because of his reputation as a political “outlaw.”

This plantation got its start in 1730 by the founder of Richmond, Virginia, William Byrd II.

Westover is known especially for its secret passageways, interesting architectural details and gardens. The gardens and grounds are open to the public; sadly, the house is closed to the public.

The home is considered to be one of the best examples of Georgian architecture in America.

This plantation is the oldest plantation in the country (founded in 1613, just six years after the founding of Jamestown), and is still lived in and operated by descendants of its original owners. (That’s 11 generations, according to the plantation’s website).

Construction on the mansion that stands there now was started in 1723 and was completed in 1738. The mansion is known as the Great House and is largely in its original state, down to some original furnishings and family portraits.

Shirley continues to be a working plantation, as well as a private home and even family business.

Evelynton once was part of the Westover Plantation, and was named for Byrd’s daughter, Evelyn. It’s been owned by the Ruffin family since 1842.

Family patriarch Edmund Ruffin fired the first shot of the Civil War at Fort Sumter. The plantation also saw some heavy skirmishes during the Civil War (in 1862) and the original house was burned down then. The current building, in the Georgian Revival style, was constructed two generations later, in 1937.

Still owned by Ruffin’s descendants, the house and grounds are closed to the public.

Berkeley touts itself as the country’s “most historic plantation.” It’s the location of the first official Thanksgiving in 1619 and is the birthplace of Benjamin Harrison V, a signer of the Declaration of Independence and governor of Virginia (three times).

Ninth U.S. President William Henry Harrison also was born here, and is the “ancestral” home of his own grandson, President Benjamin Harrison. (The 23rd President actually was born in Ohio.)

The plantation was occupied by Union General George McClellan’s troops and it was during that occupation that General Daniel Butterfield composed the beloved tune “Taps.”

The plantation is open to the public for tours conducted by guides clothed in Colonial garb. If you take a tour, be sure to find the datestone over a side door that includes the date of the building and the initials of the home’s original occupants, Harrison IV and his wife, Anne.