Important and Famous Visitors to Williamsburg 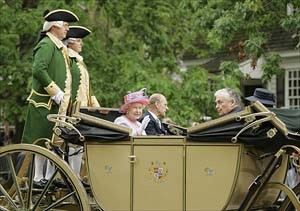 George Washington, Thomas Jefferson, James Monroe, Patrick Henry, James Madison, George Wythe, Peyton Randolph, and other historical figures of great importance to the U.S. all visited or even worked in Williamsburg before, during and after the Revolutionary War. (In fact, many of the precepts of the Declaration of Independence come from the Virginia Declaration of Rights, adopted in Williamsburg when Virginia declared its independence from Britain in May 1776.)

Williamsburg has been something of a hubbub of history ever since, with several national and international heads of states visiting this “living museum” over the years. They’ve come mostly to celebrate democracy and, as such, Williamsburg also has been the location of several summit meetings of world leaders, especially the first World Economic Conference in 1983. In addition, every U.S. president but John F. Kennedy has visited Colonial Williamsburg.

Just a few of the dignitaries and celebrities who have visited Williamsburg:

King Hussein of Jordan visited for the first time in 1959 (and returned a few more times — four total).

John Wayne enjoyed his visit so much, he stayed for a week.

Benjamin Franklin visited in 1756 on post office business and stayed to receive the first honorary degree awarded by the College of William and Mary.

Noah Webster stopped by on a lecture tour in 1785.

The Marquis de Lafayette visited in 1824 — which actually was something of a nostalgia visit for the aging Frenchmen, as he was able to stay at what is now known as the Peyton Randolph House, his quarters during the Battle of Yorktown.

Winston Churchill and George C. Marshall both visited after the war’s end.

Queen Elizabeth II visited for the first time in 1957 (and again in 2007 for the 400th anniversary of the birth of the settlement of nearby Jamestown).

The American Academy of Achievement put together a gathering of what it touted as 300 of the most successful people in America in 1995, including Barbara Streisand, Tom Selleck, Robin Williams, George Lucas, among dozens of others.