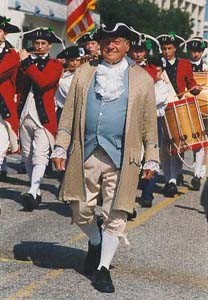 From 1699 to 1780, Williamsburg thrived as the capital of colonial Virginia – England’s oldest, largest and most influential American colony. The city was built from scratch to a bold plan fashioned by Governor Francis Nicholson and named after King William. For nearly a century, Williamsburg was at the center of important cultural, political and military events. People like the Washington’s rubbed shoulders with Thomas Jefferson and Patrick Henry, developing the fundamental concepts of the American republic. Virginia voted for Independence on 15 May 1776. Fearing British attack, the capital was later moved to Richmond, a safer and more centrally located city, and Williamsburg became a simple and quiet college town – home to the College of William and Mary.

Fortunately for historians of the future, this quiet town had little income to replace its historic buildings with newer ones. Most were still standing in 1926 when the Reverend Dr. Goodwin convinced philanthropist John D. Rockefeller, Jr. to fund Williamsburg’s restoration and create a colonial city the public could experience. They refurbished 88 original buildings and built careful copies of other buildings that had burned down. All were furnished according to period inventories. As a result, visitors today can experience much of what it must have been like to walk the streets of Williamsburg 250 years ago.

The beauty and history of Colonial Williamsburg can be experienced on many levels:

Visit Colonial Williamsburg on your next vacation! Since the historical area is quite large, it takes a good three days to see. Therefore, it is best to buy the one-year pass and plan to visit for more than one day. Many visitors return several times a year.

Just a short distance from Williamsburg is Historic Jamestown Colony, the site of the first permanent English settlement in North America. Extensive improvements are currently underway as this historic spot prepares for its 400th anniversary in 2007, an event certain to receive national and worldwide attention. Adjacent to Colonial Jamestown lies Jamestown Settlement, containing museum exhibits and reconstructions of an Indian village, the James Fort, and the three ships that brought the first settlers to the New World.

Jamestown is accessible from Williamsburg by way of the scenic Colonial Parkway, a charming and rustic road exploiting views of the James River, College Creek, and other waterways as well as the woods and other scenic views.

Jamestown offers a full day of sightseeing that encompasses both a historical site and a recreated settlement designed to bring you back in time to 1607 Virginia. To fully understand the importance of this historical site, we offer the following history of the Jamestown settlement, as well as a brief overview of Jamestown today. 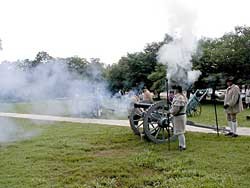 Battle at YorktownAt the other end of the Colonial Parkway, following its path through a tunnel under the Historic Area of Williamsburg and paralleling the York River, is the little village of Yorktown. This was the scene of Lord Cornwallis’ surrender to General George Washington, ending the American Revolution on October 19, 1781.

Yorktown’s extensive battlefields extend over 5000 acres, and are overseen by the National Park Service whose visitor center has information services, displays, movies, and other exhibits including the recently-restored tent used by Washington in 1781. Not far from the center of town is the Yorktown Victory Center, another fine museum. The Center helps the visitor put together the complex story of American and British life leading up to the conflict we now call the Revolution. Fascinating exhibits, first-person interpretation, and many special events make the Victory Center an important part of a visit to Yorktown.

Other Yorktown treasures to note are:

Additionally, the Watermen’s Museum, a local history museum about working the waters of the Chesapeake Bay; Grace Church, a 17th-century marl church; and other historic buildings join the growing number of shops and stores that provide visitors to Yorktown with pleasurable days full of history, entertainment, and shopping. Read the full history of Yorktown.