When you visit Colonial Williamsburg, you will immediately be drawn to the historic sites and buildings found throughout the town. Below are just some of the places to tour during your stay in Williamsburg, Virginia. 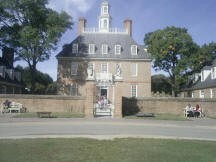 Completed in 1722, the English Georgian style Governor’s Palace was built on the city’s north side on Palace Street in Colonial Williamsburg VA. It once housed Thomas Jefferson, Patrick Henry as well as seven royal governors. The Palace contained fine gardens, offices, walkways, orchards, a carriage house and more. It hosted a number of balls and gala events when it was used for the Governor’s residence and continued to house governor’s until the government moved to Richmond VA in 1780. In 1781, the Palace was used as a hospital and took care of American soldiers who were wounded during the Battle of Yorktown. Soon after, in December of 1781, the Governor’s Palace was destroyed by a fire in the basement. The site was passed to The College of William & Mary. From the 1930s -1980, the Palace began reconstruction and was furnished with American and British antiquities. Although beautiful, the Governor’s Palace did not bear much resemblance to its earlier days. After an artifact providing a detailed description of the interior was uncovered in 1981, a new wave of reconstruction and replication began.

Today, the Governor’s Palace in Colonial Williamsburg has been restored to its original grandeur. Take a tour of the Palace, stroll through its exquisite gardens or watch a high cooking arts demonstration in the kitchen. No matter what you do, you will be amazed by this elegant building.

Capitol on Duke of Gloucester Street

After three fires claimed the Jamestown Statehouse, the Virginia government was moved to Williamsburg where it became the political center for VA. Soon after moving to its new location, the construction of the Capitol building began, led by contractor Henry Cary. The Capitol was made up of a two-story, two building structure shaped in an H and connected by an arcade. Each building was 75 feet by 25 feet. The east wing was used for the House of Burgesses and its clerk, while the west wing contained the General Court and the colony’s secretary. The committee rooms formed a bridge between the east and west wings. This H shape structure reflected Virginia’s two-house government system.

It took Henry Cary until 1705 to complete the Capitol. The Capitol was used for legislation as well as for fun with dances, suppers and social events taking place there. The building was last used as a capital building in December of 1779.

Today, the Capitol in Colonial Williamsburg VA is the third on the site after fire destroyed the original and its successor. It looks much like the one Cary originally built and can be toured. Every year, a naturalization ceremony is held here where a new group of immigrants are welcomed as Americans.